This December from 05th to 29th, Hearts for Hue continued organizing its Community Service Program for Singapore students from SMU (Singapore Management University), SIT (Singapore Institute of Technology) and SUTD (Singapore University of Technology and Design). 4 groups of more than 80 students carried out their projects in different locations of Thua Thien Hue province as below:

Three projects: Beyond Boundaries, Cloud Nine and PhoJect V; focused on building fences for their kindergartens. Even though it was the first time that they had done that type of work, they were not afraid of the difficulty; they worked extremely hard with the construction workers help. They also taught English for the children in the kindergartens and the primary schools nearby through simple songs like the numbers song, the alphabet song and some activities like coloring and drawing. The children were shy in the first class but with the enthusiasm and friendliness of the Singapore students, the children became more confident and talked more to them. The Singapore students also had many interesting experiences about Vietnamese rural life from going to the local market and having dinner with the local people. After hard-working days, they visited Hue’s famous historical monuments like The Citadel, Thien Mu Pagoda, Minh Mang Tomb and Dong Ba Market. 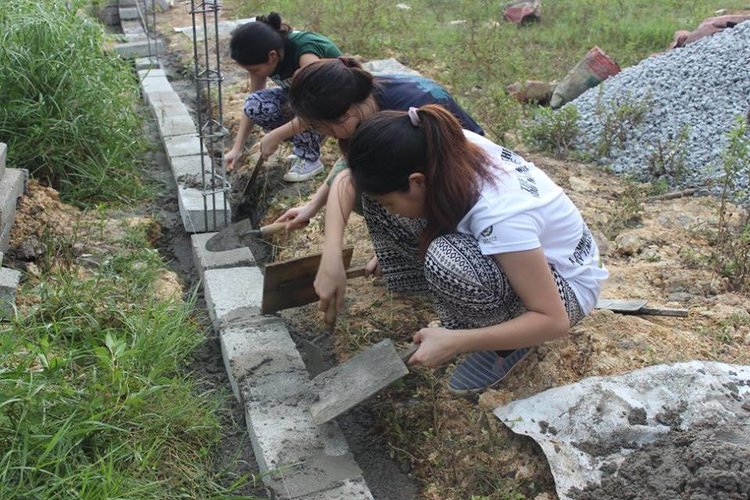 Alternatively, Project Ketnoi focused on delivering microfinance training to the local people in Huong Van commune. The majority of the participants were farmers, and their main source of income was from planting and raising cattle. Before the training, the Singapore students carried out a survey of the participants situations. The training was a good opportunity for the Singapore students to apply theory to practice. Additionally, they helped Huong Van primary school to build a shelter, decorated their green library and taught English for the students there.

After 2 weeks, the Singapore students finished the majority of the new fences which will ensure safety for the children in the kindergartens. The Vietnamese children and students had a chance to communicate and talk to foreigners. The participants of the microfinance program gained some useful knowledge about household business that could help them raise their income.

Hearts for Hue would like to say thanks very much to the Singapore students for coming here to help improve our community. Also thanks to the local authorities, the teachers in the kindergartens and primary schools and all of the Vietnamese volunteers for supporting us to deliver four successful projects.