From the 21st to the 31st of December 2013, Hearts for Hue and HươngVânKindergarten hosted 18 enthusiastic Singaporean Students from the Singapore Institute of Technology (SIT).HươngVân Kindergarten is located about 15 kms from Hue city centre, in the HươngVân commune, HươngTrà district. The goal of this project was to build a fence around the perimeter of the kindergarten. In addition, volunteers also helped to organize English classes and games for the children at HươngVân Kindergarten.

Many of the Singaporean students were not prepared for the exceedingly cold weather, yet despite this, each student worked diligently with local builders and Hearts for Hue volunteers to successfully complete the project within the 10 day period.

The project commenced over the Christmas period, which meant the children of HươngVân kindergarten were treated to atraditional celebration on Christmas day. One which involved time-honoured traditions, such as gift giving, decorating of Christmas trees and even the very special visit from ‘Santa Claus’ himself!

In the final days of the program, both Hearts for Hue and SIT volunteers were able to participate in cultural exchange session at the Au Lac University, whilst also having the opportunity to explore the city of Hue and sample some of Hue’s fine local delicacies. The program concluded with agrand closing ceremony, featuringtraditional dishes from Singapore including ‘MeeGoreng’ and ‘NasiLemak’. There were also a number of outstanding musical performances from volunteers, teachers and students.

Big thanks to all the hardworking and dedicated Hearts for Hue volunteers, students from Singapore Institute of Technology, teachers and students from HươngVân Kindergarten. Hearts for Hue would also like to thank the local authorities and HươngVân commune for making the project possible!

“This is one of the programs which have the most practical significance I have ever participated. This program is an opportunity for H4H volunteers not only to help poor children but also to introduce Vietnamese culture to foreign students. I hope that there will be more of such programs for me to contribute to the community and enrich my own skills and experience.” said

On the last days of 2013, enduring through the cold weather, Huong Van Kindergarten received warmth from the group of students of Singapore Institute of Technology. The money raised and the participation of the students supported the completion of the school gate and a 145m long fence construction that aimed to improve and ensure the safety of the children. Despite the cold weather and rainfall, the team has worked hard, contributing efforts to the fence construction. Moreover, they have also cooperated with the teachers in organizing celebrations for the children, with meaningful gifts that were prepared such as: dolls, boxes of crayons, chocolates, candy bars, story books, and stationery for the children. This showed that they had planned carefully for this program and aimed to make the best out of the trip. Within a short period of time during their stay, they have assisted the teachers in interacting with the children and guiding them in several areas such as the proper hand washing procedure, waste disposal at the designated places, saving electricity, water, soap in their daily lives, enhancing self-confidence and learning to treat others friendly and appropriately. Furthermore, during the closing ceremony, which was also the farewell celebration, they performed several Vietnamese songs, invited us to enjoy the local delicacies of Singapore, and organized united games for everyone to enjoy. They have left a very good impression in our hearts. For such wonderful sights, we cannot miss the presence of Mr. Truong Trong Khanh- Chairman of H4H, who followed the information from Red Cross to come to Huong Van kindergarten, sought for financial support and managed almost all the work. No matter how severe the weather was, he would come to the kindergarten everyday during the duration of the program, worked with the students and assisted in translation. He also suggested the contractor to give us a notice table.

The kindergarten and the parents of the children would like to express our most sincere gratitude to H4H and the group of students of Singapore Institute of Technology, and we wish you all the best for your future endeavors. Principal- Dang Thi Hoa” 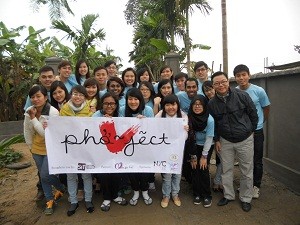 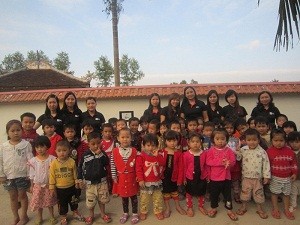