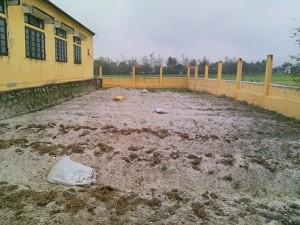 Before construction: an empty lot After: A three bed vegetable garden

Hearts for Hue staff have returned to the office after four days working with the second ever Bamboo Project/Real Gap Experience group to volunteer in Hue.

Bamboo Project and Real Gap Experience are travel operators that offer volunteering opportunities to tourists participating in their tours. They operate throughout the world, and in January 2016 begun working with Hearts for Hue to add a volunteering component to their Vietnam tour.

For the past three days, a group of 14 people from the United Kingdom, Luxembourg and Australia volunteered at Quang phuoc Kindergarten in the Quang dien district, approximately 30 minutes from Hue city. This disadvantaged kindergarten was chosen for this project by Hearts for Hue in conjunction with their existing contacts and with the local authorities.

On the 11th, 12th and 14th March the volunteers, along with Hearts for Hue staff, kindergarten staff and local volunteers, transformed a bare and unused patch of ground behind the kindergarten into a working kitchen garden, complete with many different types of vegetables already starting to grow. To achieve this, the volunteers undertook tasks such as preparing the ground, mixing cement, laying bricks and planting seeds.

Whilst the construction was going on, another group of volunteers were inside the kindergarten with the students, teaching them basic English skills and working on developmental exercises, including singing, dancing, painting and drawing.

The visible results after only three days were fantastic, and it was clear the kindergarten were extremely happy and thankful, if their send-off was anything to go by! The kindergarten’s principal Mrs Ngua gave a moving speech, and the students and staff both gave a performance.

The new garden will have lasting outcomes, enabling the kindergarten staff to grow nutritious food at low-cost for the students and for the pupils to learn about growing their own food and eating healthily.