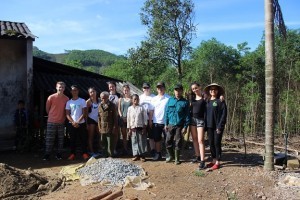 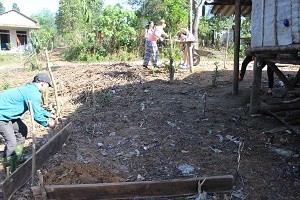 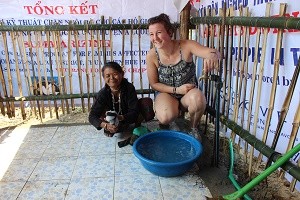 Hearts for Hue recently welcomed six British volunteers to Hue as part of their monthly Bamboo Project tour of Vietnam. The foreigners spent four days in Hue, taking a break from their travels to give back to the local community.

The group spent their time in Phuc Loc village – Phu loc district,Vietnam, located 35 kilometers from Hue with a population of 540 people. Approximately 90% of the villagers are from the Bru Van Kieu ethnic minority, and as the village is in a remote mountainous area, the vast majority are living on the poverty line. In fact, up until last year many of the houses did not have access to clean water, and were forced to carry unhygienic water from local small streams by hand back home. In 2016, with the support of D.O.V.E Fund, Hearts for Hue in collaboration with Hue Water Company (HueWACO) installed a clean supply water system, involving the construction of a water collected dam, a water filtration tank, a water supply pipes system to each house and Mrs Hoa is one of 140 families in this village benefiting from the water project. The project had a huge impact on the beneficiaries’ everyday lives, as they were then able to access clean water from their out the front of their own houses.

However with the aim of further improving the sanitation and hygiene for local people, in 2017 Hearts for Hue made the decision to bring the monthly group of Bamboo Project volunteers to Phuc Loc village to deliver further construction projects. This month, in conjunction with the local people and under the hot sun, the six volunteers spent three days building an enclosed washing area for the family of Mrs Hoa. Prior to this project, the family had no privacy when they were washing dishes, clothes, or themselves. However at the completion of the three days the family now had a concreted and tiled, bamboo walled and steel roofed totally private washing area. It was clear the new washing area was extremely popular as many neighboring villagers came to view the finished product on the final day.

Hearts for Hue is very proud to continue the relationship with Bamboo Project, and proud of the impact these monthly volunteering projects are making on local communities in need. All of the February volunteers commented about how fulfilled the project made them and how humbled they were to have been welcomed into the Phuc Loc village community. They were sad to leave (especially sad to leave the local children) but everyone left with smiles on their faces. Hearts for Hue thanks Bamboo Project for their continued collaboration and looks forward to future impactful projects together.

Check out additional photos from the project on our facebook!