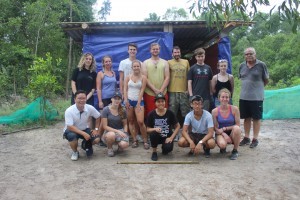 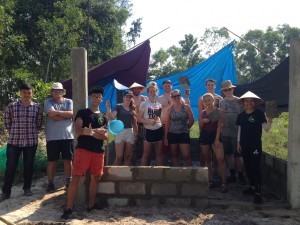 In the week starting April 17th, Hearts for Hue has carried out two actions in favor of a family with people suffering mental illness. On Monday, April 17th, 50 chickens were distributed to this family. On Friday April 21st , and Saturday April 22nd, UK volunteers of the Bamboo Project built a chicken pen for this family.

These actions are part of the different progressive steps contemplated by the Program, namely, Step 2B and Step 3.

Step 2B, denominated Animal Raising, in which the Program Participants receive chickens or other animals as well as animal raising training as a way to enable them to increase their incomes.

Step 3, denominated Animal Shelter, in which Program Participants, are supported in building larger shelters for the animals, as a way of enabling Participants to improve their facilities to further expand their raising scale.

In this case, the support contemplated under the Step 3 was provided by a group of UK volunteers from The Bamboo Project. These brave volunteers performed a great job and completed the construction of a chicken pen in two days of hard work, no matter the high temperatures or other weather conditions.

Volunteers. A word that we have been using many times on this website and that it is used thousands of times in reports, articles, conferences, newspapers…. And it still causes on us admiration for these people ready to help others and willing to bring a little bit of happiness to other people’s lives. And all that without recognition or profit for the volunteers. As it has been written before, volunteers biggest and sole reward is the realization that you’ve made a significant or positive change in someone’s life.

And among all these brave U.K. volunteers, a special reference should be made to Guy Bryson, a London teenager who decided to spend his nineteenth birthday living a new experience. He said ” When we first came to the house we were warmly welcomed by the family, an honest disadvantaged family from just outside Hue. We set out what we were there to do and quickly set on doing it, providing this family with a sustainable way of living via chickens. The chickens themselves from altruistic donators to the Hearts for Hue charity, we ourselves with the help of a local builder set out to give these chickens a proper shelter. We separated into two teams, one of them mixing cement and crafting components and the other building the foundation of the shelter. I was in the latter team and we worked with both the local builder and representatives from the Hearts for Hue charity to construct the foundation for the chicken shelter. We had a break for a lunch hosted by their neighbors and supplied by a local restaurant, after that we set back to work – the two teams combined and we set about building the walls for the chicken shelter which we finished before leaving.

On the second day we were to finish the chicken shelter, it also happened to be on my birthday, it was a big and welcome change to spend the day giving back instead of all the focus being on myself. Thanks to the efforts of all those involved we were able to finish the chicken shelter and were able to continue our efforts in improving the life of this family by renovating their kitchen and constructing a new washing area. I very much appreciate been given the chance to give back to the community through the Hearts for Hue charity and I’m sure the family very much appreciated the efforts of all those involved in giving them a sustainable way of living. A day later we came back and the family threw a lovely party for us celebrating our combined efforts in improving the creating the chicken shelter and renovating their kitchen. Hearts for Hue does a lot of good work and it was my honor to be a part of it”