Since 2015, with sponsorship from Veterans for Peace, Hearts for Hue has been working together with small holder farmers affected by Agent Orange in the A Ngo region of A Luoi to develop a pig raising programme. Initially, the pig raising programme was a large success. However, with the outbreak of swine fever in 2019 which has killed hundreds of millions of pigs throughout Africa, Europe and Asia (including in Hue Province), farmers in A Ngo have chosen to move away from pig raising. 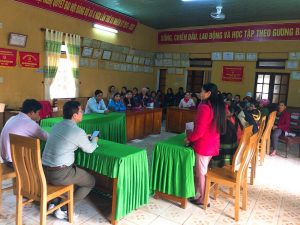 With the A Ngo farmers deciding to move away from pig raising, Hearts for Hue held a meeting on Friday the 3rd January 2020, with the A Ngo farmers and the A Luoi Department for Agricultural Extension to decide how best to manage this move. During the meeting, the farmers were given the choice of what they would like to do instead of raising pigs, and by a large margin (close to 90 per cent), the A Ngo farmers voted on a transition to goat raising.

In many respects, the decision to raise goats shows how local farmers will make the best choices when given free reign over production decisions. Specialists from the agricultural departments of the University of Tasmania (Australia) and the Hue Agricultural University have since confirmed that goats are well suited to conditions in A Ngo, and going forward, will be advising the farmers on suitable feed.

The programme will officially begin in April, when the weather improves. Twenty families will each be provided with 10 vaccinated baby goats along with training and supplementary inputs to maximise the chances of successfully raising the goats.

Hearts for Hue would like to take the opportunity to thank Veterans for Peace for their longstanding financial support of Hearts for Hue’s work with victims of Agent Orange in A Luoi. The financial support began in 2013 with a cattle raising programme, moved into pig raising in 2015 and is now transitioning into goat raising in 2020. These programmes all fall under the A Luoi People’s Committee’s policy for the development of animal husbandry among smallholder farmers. We would also like to express our gratitude to the A Luoi Department for Agricultural Extension for their help in facilitating the programme.